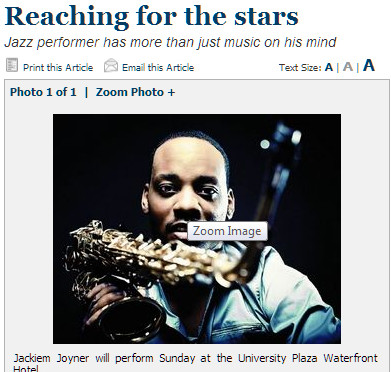 While he continues searching for an inner musical calm, Jackiem Joyner’s also imagining a science-fiction world in distant outer space.

There’s also “Zarya.” She’s the principal character in a sci-fi novel Joyner’s been crafting for two years while he’s built a 13-year musical career by touring the earthbound world and recording five albums.

“I’m not really sure how long,” said Joyner, 34, a multi-faceted former athlete who plays all five saxophones, flute and piano and tours the world with Keiko Matsui, a Japanese keyboard player and composer. “I’m always getting stories out of my head on to paper.

“I’ve always wanted to write my own book. I’ve imagined a younger girl on another planet – maybe 15 – but in a highly advanced society. She’s in super sci-fi. I’ve always looked at comic books. There are a lot of video games I love. I’m on the first draft (of his book). Maybe a few more tries.”

He’ll concentrate on music Sunday, however, when Joyner and his five-piece band play at Stockton’s University Plaza Waterfront Hotel.

So far, Joyner’s attempts have been successful this year. “Evolve,” his fifth recording, was well-received. Following 2012’s “Church Boy” and inspired by Joyner’s Christian youth, it was the top-selling jazz CD/download on Amazon for most of April.

“This doesn’t have as much of a gospel feel,” Joyner said recently from Palmdale. “I wanted to kind of bring it back to a more contemporary jazz scheme. It’s a pleasure to have an album full of jazz ‘songs.’ “

A sense of inner spirit never has been far from the front of Joyner’s jazz.

Born in Norfolk, Va., he mixed music, church and athletics, influenced by dad Charles Ray Smith, who played bass in a “kind of party” band with mom Dianne Joyner Barnes “always on the bus.”

At 6, Joyner – discovering lots of inner support in a Pentecostal church and its music – got “really excited” and began playing organ and guitar. With a drum fascination.

“I just liked to go at the end and bang on the instruments,” Joyner said. “I actually wanted to play drums, but lots of drummers told me to pick other instruments. Obviously, the sax had a lot of buttons and was really shiny.”

As a sixth-grader, he moved with his mom to Syracuse, N.Y., where he experienced some North-South culture shock: “Things I’d never seen anything like in my entire life.”

After grabbing his first sax, Joyner “just started to enjoy it,” he said. “I just started messing around. By the second night, I did a little bit more. Listening to Grover Washington, Charlie Parker. Dexter Gordon, Spyro Gyra. I think I started to take it seriously after three hours.”

He also spent hours running the 800-meter and other distance events for Fowler High School’s track team – he wasn’t named for U.S. Olympian Jackie Joyner-Kersee, though, “yeah, I get that all the time” – and as a power-forward in basketball.

Despite his athletic desires, saxophone beat out basketball: “I didn’t wanna jam my fingers.”

Joyner’s intellect was in good shape. He won three straight Syracuse NCAA academic awards in music (instrumental contemporary, composition and classical). He played in his school groups and an Air Force-sponsored band.

He was impressed by “seeing other pro musicians and cadets interacting and how good they were musically when they came together.”

In 2003, Joyner and wife, Lola, moved to Corona. He shared tours with Ronnie Laws, George Duke, Najee (a major sax and flute influence), India.Arie and others.

Though Joyner still performs in “mega”-church settings – Saddleback in Lake Forest – he’s now a nondenominational jazz man: “I don’t do it as much as I used to.”

Because of his varied backgrounds and acquisitive interests, no label fits very neatly.

“Oh, man, I really just try to be myself as much as I can,” he said. “I don’t really align with one world: straight-jazz. Gospel. Contemporary. Smooth jazz.

“I learned how to play all the keys with confidence. I wouldn’t say it’s that as much as it helps me play with a lotta soul and spirit. That probably comes from being able to connect with the inner spirit.”