This has been an intriguing question to myself as a performer. Some have asked: Do you consider yourself a smooth jazz saxophonist? Well, that will depend on which of my songs you’re listening to!

I’ve now been in the recording business for over a decade and it has been an exciting journey for myself. Touring to over 30 countries and performing with other great smooth jazz saxophonist like Dave Koz and Kirk Whalum.

Also opening concerts for people like David Sanborn as well as Kenny G! It’s been a fun journey to say the least and I have enjoyed myself.

I’ve always promised my audience that I’d deliver the best possible music to their ears. So many songs written and played and produced!

But what gener do you call those tunes? Are they smooth jazz? Are the funk Jazz? What category do we put them.

From many of my conversations with some of the best smooth jazz saxophonist in the business, most of them, like myself are reluctant to put a label on our music.

But that doesn’t mean we’re not really smooth sometimes!

If you were listening to my song “Europa” featuring Keiko Matusi. You’d certainly be inclined to call me a smooth jazz saxophonists! Here’s a clip of that smooth song right here.

Certainly one of my smoothest tunes. I’d be fine if you called me a smooth Jazz saxophonist after hearing this tune! The video is not the original as this is a live version. The original piece has Keiko Matsui playing piano. And here touch on that song is just simply amazing!

There are other songs that I’ve recorded that you might say. He sounds more like a Funky Jazz saxophonists.  I’ve always enjoyed playing funky music and felt like it was just something deep in my soul! Here’s a cut hat I consider to be super funky! Its from my Jazz album “Main Street Beat” which was released to high praise in July of 2017.

As you can see I was channeling my inner funkiness with this song!

Coming up as a child I really didn’t know what type of saxophonist I’d be. I received a tape from my high school music teacher the day I first touched the horn. On that tape were greats! I was too young to realize that at the time!

Notice I say tape? For you millennials, tapes are what we use to play music on before cds! 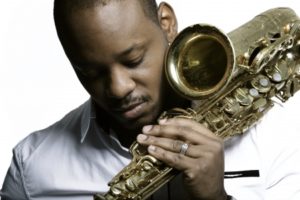 On that tape were greats such as Charlie Parker, John Coltrain, Dexter Gordon, and many more. It really was my first experience to what a saxophone should sound like. I later came to realize I was listening to some of the greatest jazz saxophonist in history.

After spending my first years studying all the moves of Charlie Parker, I decided to settle in with a more smooth sound. Commonly know as smooth jazz. I didn’t really care what I was called but there was something about the sound of Grover Washington Jr that really resonated with me as a saxophonist.

The way he played R&B on the saxophone was just way too super cool and I had to do it!

I then started to play my own R&B songs and after signing my first record deal, recorded r&b, pop, funk, and even rock in some cases!

If there were a name for the kind of saxophonist I am, It would be just too many! I simply enjoy good music.

Kenny G seemed to have branded himself as smooth and people simply loved it! His sound being gentle and smooth stroke a core with millions and millions of listeners. I’ve seen Kenny G live and he’s much more than what some might call elevator music. He’s an excellent player and wonderful musician.

There’s a really smooth jazz song that I wrote called “Stay With Me Tonight”. This song was the first of mine to ever be played on national radio. It was my very first single and it featured smooth jazz guitarist Peter White.

I can remember the first time I heard it on the radio. The feeling of hearing you own song on the radio is something hard to explain. But my first question was: Can everybody else here this? A beautiful moment for any musician in the recording business to say the least!

Another smooth jazz song of mine is “I’m waiting for You”. This song turned out to be my biggest hit at radio! Spending 12 weeks on top of the smooth jazz radio chart. While it’s not as down tempo like “Stay With Me Tonight”, it certainly is a smooth jazz song. Unlike some of the more funky tunes I’m known for.

Touring as a musician has been such a gratifying experience for me. I’ve been blessed to see some of God’s greatest creations. From Japan, to England, and even to South Africa and Nigeria.

Touring the world as a musician has some amazing perks! And even though I didn’t speak many of the languages I’ve come across, the language of music with the saxophone was an is universal! Performing in some of the greatest venues too.

It still amazes me some of the venues men have built. All for the sound of music! But not all experiences are good. As you might have guessed, traveling can and has had it’s challenges. But I still wouldn’t trade this career of music for anything in the world.  And seeing you guy’s facial expressions when we know you’re in tune with our performance. It’s a high that only a performer would understand!

I tend to use it for more of Funk soul and R&B. But I love to play smooth too. And I love to write songs for other smooth Jazz saxophonists as well! I just love what I do!